Living Art Aquatic Design, Inc. has been serving the Los Angeles community for over 40 years. What started as a hobby for founder Ron Rheingold became a lifelong pursuit. For Ron, it was never just about installing tanks, and that is something that has permeated every part of the business. We pride ourselves on creating the right installation for the right customer. Our experience ranges all the way from the installation and maintenance of tanks to the biology of caring for your fish and ecosystem. This standard of excellence is what has led is to work with some of the biggest Hollywood celebrities, production companies, and fortune 500 companies in the country. For us, it all started with Ron and carrying his philosophy and experience through the business.

Ron was 7 years old when he took an interest in aquariums and marine biology. He used to ride his bicycle to the fish stores all over town buying up fish, chemicals, rocks and everything else he would need to build his first 10 gallon tank. By the time he was 15, he was so obsessed that he got a job working at the store where he had purchased his first fish. Little by little, he became the fish and aquarium expert at the store. Customers even began to come to Ron to rely on his knowledge of aquarium maintenance services.

It was in college that the real turning point came in Ron’s career. He was studying marine biology and running an aquarium maintenance service business on the side. Things were going so well that Ron realized he needed to take things more seriously. He opened his first company when he was 19 years old. By the time he was 20, the company was turning a profit and he could barely handle the workload.

His first company was called Aquatic Design to fit with the basic services Ron initially offered. But as Ron’s interest in marine biology and aquatic life preservation increased, he would later rename the business as Living Art Aquatic Design, Inc. This new business represented all of the experience and knowledge that Ron had gained. He was no longer just building and cleaning fish tanks for clients. Living Art Aquatic Design represented what Ron now did for his clients – created living art to fit their wishes. 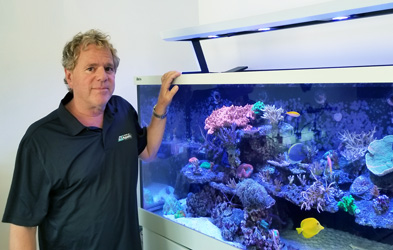 The Only Aquarium Showroom In Los Angeles

Living Art Aquarium Design, Inc. originally offered basic aquarium maintenance services. Now, we help individuals and businesses create custom saltwater aquariums, freshwater aquariums, ponds, and water features. No project is impossible for our installation and design experts. Our gallery page shows a wide variety of our past projects from simple indoor aquariums to outdoor koi ponds and even aquariums built into the floors of businesses. Our showroom floor also displays a wide array of fish, coral, and plants for your custom aquarium build.

If you are looking for more information about our services or just want help on the planning and design of your aquatic features, give us a call at (310) 822-7484